File a Complaint Against an Insurance Company for Bad Faith

Home » File a Complaint Against an Insurance Company for Bad Faith 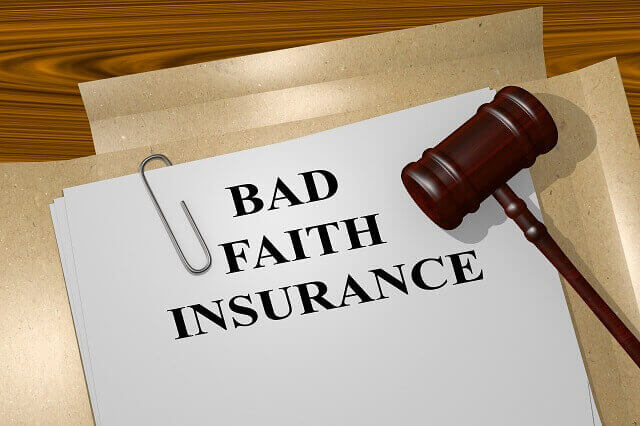 Insurance bad faith is commonly misunderstood, but it is a form of insurance fraud performed by the insurer or their claims adjusters. It is a form of mistreatment toward consumers and accident victims by the insurer, and usually applies when a victim is trying to receive compensation from an insurance company following an accident.

Unfortunately, bad faith insurance tactics are used more commonly than people know. Some may have even been the victim of bad faith insurance and not even know about it. Insurance companies always look for ways to save their bottom line (and pay as little as possible), but when they use illegal tactics to do so, they are acting in bad faith. Accident victims must then take the insurer to court.

All insurance contracts have an implied covenant of good faith. This means that the insurance company, as well as the customer, cannot do anything without acting in good faith toward one another. As part of the contractual arrangement, the insurer is obligated to compensate the insured in a timely manner when a valid claim is presented to them.

There are statutes in place to protect consumers as well. Under Kentucky Statute 304.12-230, it is unfair for any company to fail to comply with provisions set by the state or to operate in bad faith.

Depending on the jurisdiction where the bad faith claim occurs, you may be able to request damages from the insurance company for their actions. This means that they may have to pay compensatory damages, which would put you in the same financial position that you would have been, had the company acted in good faith. In some cases, you may qualify for punitive damages against the insured, but this is only if the intentional bad conduct warrants such.

Bad faith claims are extremely complex, so it is wise to contact an attorney for assistance with your suspected bad faith claims case. While a denial does not automatically constitute bad faith, it is important to have your claim assessed by an attorney. Often, insurance companies will settle or offer a better compensation amount the moment when an attorney gets involved in the case.

Speak with Attorney Seth Gladstein Regarding Your Case

If you think that you have a case for bad faith against your own insurance company or another insurer, contact the Gladstein Law Firm, PLLC today. You can schedule your free consultation now by calling us or requesting more information online.

What Are Common Complications from Burn Injuries? Can a Minor File a Lawsuit in Kentucky?