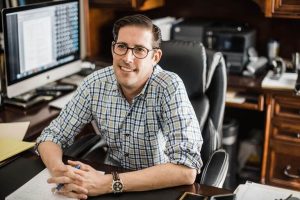 Seth Gladstein serves the Louisville area through the practice of personal injury law. Seth graduated from St. Francis High School in 1993, and subsequently acquired a Bachelor of Arts degree in political science from the University of Michigan – Ann Arbor in 1997. During his time at Michigan, Seth was elected by his peers to serve on the College of Literature, Science and Arts’ Student Government, in addition to working as an intern for one of Kentucky’s United States Senators in Washington, D.C.

Seth received his J.D. from Chicago-Kent College of Law in 2001. After graduating, he moved to New York City and spent four years practicing law for one of the city’s most respected and distinguished medical malpractice defense firms. During this time, Seth defended some of the country’s leading physicians and hospitals, including New York-Presbyterian Medical Center, Memorial Hospital for Cancer and Allied Diseases, and North Shore University Hospital. These malpractice cases involved numerous medical specialties, including ophthalmology, medical oncology, surgical oncology, orthopedics, obstetrics and gynecology, psychiatry, internal medicine, and cardiothoracic surgery, among others.

In 2005, Seth returned home to Louisville in order to practice with one of Kentucky’s largest and oldest defense firms. During his six years at the firm, Seth’s practice again focused on hospital, physician, and nursing home malpractice defense. He defended numerous physicians, hospitals, and nursing homes in both state and federal court, in addition to personally handling numerous motor vehicle accident, workers’ compensation, personal injury, insurance bad faith, and commercial litigation matters.

Gladstein Law Firm is located in the city of Louisville, Kentucky. They also serve people from the areas of Bowling Green, Lexington, Murray, Owensboro, and Paducah.